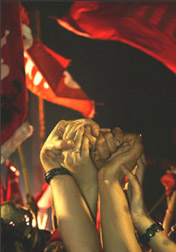 from the CISPES 2009 elections blog

The historical significance of this shift in power cannot be understated in light of the repressive rule that the Salvadoran right-wing has exerted over the people since the massacre of nearly 30,000 indigenous campesinos in 1932. In electing the FMLN, the political party formed in 1980 as an alliance of popular armed forces that fought back against widespread state repression, the Salvadoran people have created an opportunity to realize the goals of social and economic justice. Furthermore, in rejecting the ARENA party, one of Washingtonâ€™s closest and longest-standing allies in Latin America, Salvadorans have dealt another blow to the Washington Consensus and to the United Stateâ€™s presumption of free reign throughout the Americas.